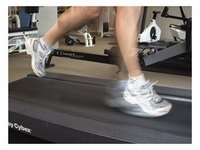 Ralph Klein, 63, decided to do something to lose some weight and get back in shape. This was twenty years ago. At the age of 43, the 5'8" politician weighed somewhere between 230 and 240 pounds. He says he was 'grossly overweight' at the time.

That's when he started running on a treadmill. At first he found it very difficult to complete even one mile. It took him six months to get up to three miles. He soon got down to 185 pounds. And he has maintained this weight, give or take a few pounds, for the past 20 years.

His method has been to do an average of 3-4 miles on the treadmill each day. He seems to have incredible will power; he says he has probably only missed less than five days in the past twenty years. Klein says he doesn't pay much attention to his diet and that he has a weakness for hamburgers and pizza.

But the exercise has more than compensated for this. Klein is happy with his weight and doesn't see himself stopping the exercise routine when he retires next year.
Labels: Treadmill Stories

A Slimmer Waist in the Imaginary World 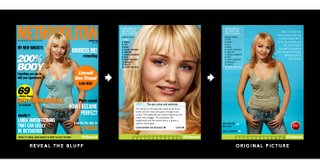 Those magazine covers in the check-out counter of your local grocery store are terribly misleading. It's amazing how much retouching goes on to make beautiful people look even more unrealistically beautiful.

Because young girls are the most susceptible to comparing themselves to unreal standards of slimness and beauty, the Swedish government recently hired an ad agency to create a campaign showing young girls how magazine retouching works.

Check it out for yourself. You can see the before and after pictures at this link. You'll see how they've made the models waist skinnier, her breasts bigger, lips fuller, eyes brighter and teeth whiter. 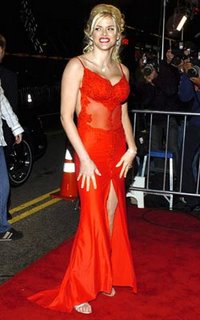 Smith created a lot of interest in TrimSpa a couple of years ago when she lost a great deal of weight. She will continue to be a TrimSpa spokeswoman while pregnant.

She's keeping the father's identity a secret for now.

Update February 9th: Anna Nicole Smith is dead at the young age of 39. She died yesterday, February 8th 2007. Her son died only a few months ago and it seems this was a tragedy she was not able to cope with. She leaves behind her baby daughter, Dannielynn Hope. ET reports that she had tried to commit suicide earlier in December when she was found unconscious in the bottom of her pool in Bahama. Her bodyguard was able to revive her.