Jessica Alba is one of the most interesting celebrities of 2006. What's her method of keeping fit?

She says she doesn't have a particular diet or food plan but she eats relatively lightly. Dinner is usually vegetables and chicken or fish. Lunch is a salad. Snacks are dried fruits. Breakfast can be cottage cheese and a peach or an omelet and fruit. She tries not to eat breads or sweets (other than chocolate). She tries to exercise every day for 45 minutes to one hour. 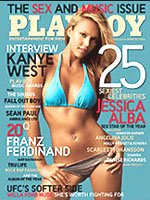 She works out on either a treadmill or an elliptical machine and she also does lunges and crunches and works on her shoulders, biceps and triceps.

She started her acting career when she was only 13 years old. Her parents didn't have much money and she says everyone in her family was severely overweight so she started cooking her own meals when she was only twelve. Jessica Alba suffered from eating disorders, obsessive compulsive disorders and panic attacks when she was a teenager. At one point she was so seriously malnourished she weighed just over 100 pounds. 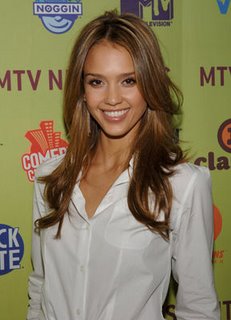 Update May 2006: It looks like Jessica's eating disorder may be coming back to haunt her. Since she's appeared on the Playboy cover a couple of months ago and received the huge extra publicity for suing the magazine, she has lost a great deal of weight. Probably at least ten or fifteen pounds from her already slim 127 pound frame. She looks emancipated now; frighteningly so.
Labels: About Celebrities
Newer Post Older Post Home