A couple of days ago Oprah was on ABC News discussing some key moments of her twenty years of the Oprah show.

She mentioned that losing weight very quickly in 1988 was one of her worst moments, as she gained much of it back almost as quickly. 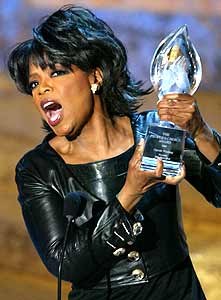 During 1988 she went on a four month liquid diet and put her social life on hold. She lost an incredible 67 pounds over this time, and was able to fit into size 10 jeans. Thus she reached her lowest adult weight ever, at 145 pounds. But within a couple of days of going off the diet she was no longer able to fit into the prized jeans. Within a week, she had gained back ten pounds and was embarrassed to attend a party that weekend where everyone would see she had gained weight.

Oprah reached her highest weight in 1992. At that point she weighed 237 pounds.

Oprah looks fantastic lately. The photo on the left is this months issue of the Oprah magazine. The picture on the right is Oprah 18 years ago in 1988. She is not at her slimmest point now, but her normal range weight level helps to make her look very attractive. (Update: January 2006: How much does Oprah weigh now? Her current weight is 163 pounds, according to a comment by her personal trainer, Bob Greene, in the January 3, 2006 issue of Woman's World.)

Her 52nd birthday is coming up in January and she is feeling better than ever and feels she has moved into a new groove with the show.

Update: May 14th:Oprah has gained another ten pounds again. She must weigh about 173 now.

Update May 22nd: Oprah has just signed the biggest non-fiction book deal advance in history. She is being paid more than $12 million by Simon & Schuster to write about her weight loss saga together with her trainer Bob Greene. She says her adult weight has fluctuated between 138 pounds and 198 pounds.

Update: July 2006: There's a strong rumor going around that Oprah and her boyfriend of twenty years, Stedman Graham are splitting up for good. They've split up for short periods of time in the past, but this time it looks like it may be final. 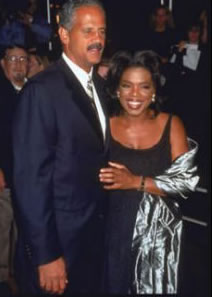 And the gossip rags are saying that he has written a book that he is threatening to publish unless he receives more money ('a sizable allowance') from her. The book is said to go into details about her yo-yo dieting and binging as well as other hurtful private information.

Steadman Graham has already written nine books, two of which were New York Times bestsellers; You Can Make It Happen: A Nine-Step Plan for Success and Teens Can Make It Happen: Nine Steps to Success. I personally find it hard to believe that he would ever do such a thing as publish dirt on Oprah after being with her for twenty years.

Update July 10th: Oprah is on the cover of 'New Idea' magazine this month. Here she says Jennifer Aniston has helped her gain control of her weight.

They say Aniston has transformed her boyfriend Vince Vaughan from 'a chunk to a hunk' via the Zone Diet and Oprah has been following the diet too. This magazine says her weight went from 88kg down to 82kg. I think they've got their numbers wrong. That would put her at 180 pounds (82kg) right now which doesn't jibe with her appearance.
Labels: About Celebrities, Oprah Winfrey
Newer Post Older Post Home