Michael Becker: Before and After Pictures

Is it really possible to change ones appearance so much in only twelve weeks? Here is Michael Beckers 'before' photo and an 'after losing 56 pounds' photo. He initially weighed 280 pounds and now weighs 227 pounds. 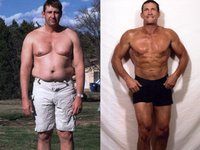 His body fat ratio went from 27.4 percent to 8.8 percent. He lost 56 pounds of fat and gained three pounds of muscle. He is one of the six finalists in the running for a one million dollar prize in the Body-for-Life Challenge. The winning candidate will be chosen in the second week of January 2006. See the six finalists here.

Update January 13th: The million dollar winner will be announced tomorrow. My bet is on Michael Becker.