Fiona is one of the people participating on the Biggest Loser TV show in Australia. She weighed 101 kilograms (223 pounds) at the beginning of the contest and her goal is to lose 35 kilos (77 pounds) and fit into a size 12 dress. (Her height is 175cm - five feet nine inches.) 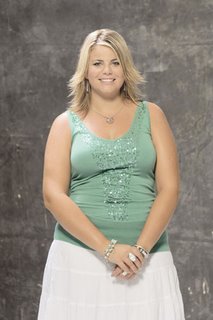 Fiona gained most of her excess weight when she was sixteen. She is now 23 and the youngest contestant on this show. She's getting more than her fair share of attention compared to the other 11 contestants and has lost an amazing six kilos (13 pounds) during the first week of the program.

She seems to have natural star appeal and if she can hang in there she could be Australia's next big celebrity.

I'll update this post as more news comes in.

Update: March 28th: After a few weeks of relative stalling, Fiona had a great week. She weighs 86 kilograms in week six of the program. (That's 190 pounds.)

Update: April 19th: Fiona is now one of the last four finalists. At the end of week eight she weighed 87 kilograms.

April 27th Update: The final results are in. Ardo (Adriano Sarnelli), won this year's biggest loser in Australia. He lost 51 kilograms (37% of his body weight) in just four months. He has been obese all his life and still can't believe this rapid transformation when he sees himself in the mirror. This kind of incredibly fast weight loss required working out four hours a day. 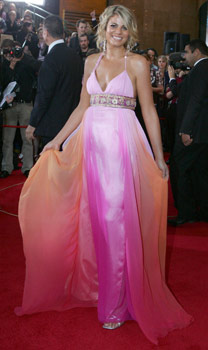 What an incredibly beautiful dress. This photo was taken by Fiona Hamilton for the Herald Sun.

Update: October 3rd: Fiona has just been the first contestant eliminated from the Dancing with Stars competition in Australia. She was battling blisters but will be back for the finale. No doubt we'll see her in lots of other TV events in the near future.
Labels: About Celebrities, Biggest Losers
Newer Post Older Post Home